Erin Perry: In your column, you also talk about the European Patent Office. What role does this play exactly in the lives of inventors and in the development of ideas?
Eamonn Fitzgerald: The European Patent Office plays an enormous role, not just in Europe in this area but throughout the world. And I had the pleasure of visiting the office recently and it was a wonderful experience, which I describe in my column. The first thing that struck me was the incredible level of security. It was airport level, plushier: noch strengerplus! And this is because what the office protects is so very valuable. There are about 6,000 people working there, highly skilled, many of them called “patent examiners”. And it has a budget of about €2 billion. So, in this world, ideas are examined, and if they are to deem sth. (to be sth.)etw. (als etw.) erachtendeemed to be original and not copies of anything else, the person who has created this invention is awarded, or “to grant sth.etw. erteilengranted”, a patent and can then begin to to recover sth.hier: etw. wieder hereinholenrecover all the investment that was made in creating this and also to make a profit as more and more companies begin to use the idea. And this is so very, very important because if anybody then comes along and attempts to steal my idea, steal my song, then I can go to my lawyer and say, “they have taken my intellectual property, I want to punish them”. And there was a case in an American court in May, where Samsung had to pay Apple $540 million for copying some aspects of the iPhone. So the European Patent Office is very central to protecting intellectual property. And, if you don’t want to go there and go through this level of security, you can always go online to its website and you will find there about 100 million documents. And if you are an inventor, if you are a person with an idea, you can go through many, many of these documents, see how it has been done, learn from that process and then to proceedweitergehenproceed to patent your brilliant idea.

Erin Perry: Finally, Eamonn, is there a limit to the number of new ideas that a society can generate?
Eamonn Fitzgerald: Absolutely not. If we go back to the work of Leonardo da Vinci, who created the Mona Lisa, The Last SupperDas letzte AbendmahlThe Last Supper. Look through his notebooks [and] we will see his thoughts on everything from helicopters to parachuteFallschirmparachutes. And this aspect of humanity continues throughout history, through our times. Somebody had the idea a few years ago of using vapourDampfvapour to to convey sth.etw. übertragen; hier: als Trägersubstanz für etw. fungierenconvey nicotine. Now, nicotine, like caffeineKoffeincaffeine, is a substance that many people enjoy using. But tobacco smoke contains toxins and carcinogens, and so the development of the e-cigarette was a classic example of somebody thinking and to come up with sth.sich etw. einfallen lassencoming up with a very clever solution. And I’m reading a book at the moment — bandwidthBandbreiteBandwidth by Eliot Peper. In this book, we are in a world where there is a large organization called “The Commonwealth”, and The Commonwealth provides everybody with a personalized feedVersorgung mit Nachrichtenfeed of their entertainment and their news and their information. Until somebody hacks into this and then begins to create a chaotic world. There’s a young woman called Kylie Jenner, she’s 20 years old. She has more than 100 million followers on Instagram. And last year, she sold more than $300 million worth of cosmetics. She puts up many photos every day on Instagram and Snapchat of herself wearing her cosmetics. That was something that never existed before, but Kylie Jenner, who’s only 20, has created this incredibleunglaublichincredible business out of her own head, out of this idea. There was a time when there was no Business Spotlight and then suddenly there was. And the product has changed and expanded over the years. And here’s another example of where ideas change, develop, taken out of the airhier: ausgedachttaken out of the air, turned into a product, turned into something useful. And as we sit here, having this conversation that no humans have ever had before, outside the window, our sound engineerTontechniker(in)sound engineer Charly Braun is making sure that it will be presented in a way that is uniqueeinzigartigunique for the Business Spotlight audienceHörer(innen)audience. So all these examples show that we will never, ever to run out of sth.von etw. nichts mehr habenrun out of ideas. 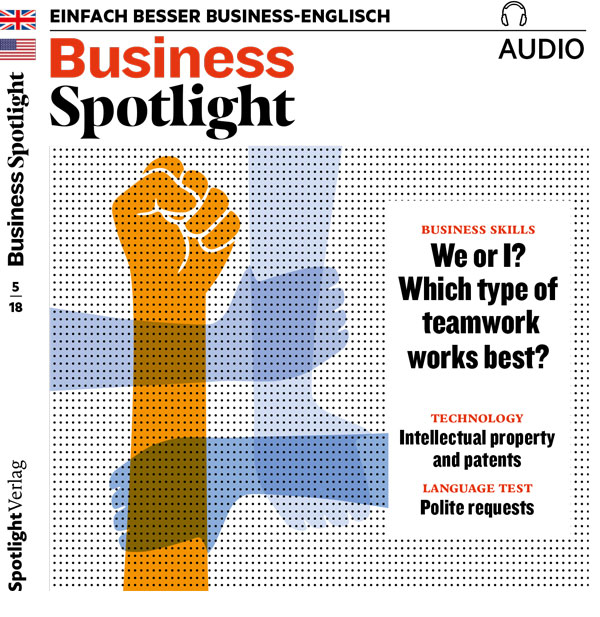