The building in which the European Central Bank in Frankfurt is located is 183.7 metres tall. That makes it a skyscraper. In fact, any building that is more than 150 metres tall is a skyscraper, according to the modern definition. For buildings that are higher than 300 metres, such as The shardScherbeShard in London, the word “supertall” is used, and those higher than 600 metres are classified as “megatall”. So at 632 metres, the Shanghai Tower is definitely megatall.

Travelling at 20.5 metres a second, the Shanghai Tower elevator takes 55 seconds to reach the observation deck on the 119th floor. From there, visitors can look across this vast city in the Yangtze River Delta. With its population of 24 million people, Shanghai is a megacity in every sense, and it’s also a global financial centre, an international transport hubDrehscheibe, Zentrumhub and the gatewayTor, Zuganggateway to China’s markets.

Now, imagine you’re in that elevator in the Shanghai Tower and Masayoshi Son walks in. He’s the Japanese founder of SoftBank, which runs Vision Fund, the world’s largest technology fund. To get an idea of the kind of money Son works with: three years ago, SoftBank invested $4.4 billion (€3.93 billion) in WeWork, a company headquartered in New York that provides shared workspaces for start-ups, freelancers, small businesses and large enterprises (see Business Spotlight 5/2018, p. 72).

Ready with your idea?

as it happenszufälligerweiseAs it happens, you have an idea for a business that’s going to be ever bigger and better than WeWork, so this is your chance to sell it to Masayoshi Son. You’ve got 55 seconds because both of you are going up to the observation deck. But then a minute or so is the ideal length for an elevator pitch. So, go!

An “elevator pitch” is a short sales talk. It achieved a kind of cult status during the second half of the 1990s, a time of dramatic growth in the use of the internet, when people threw money at all kinds of crazy business plans that included a dot-com website in their marketing.

A gig economy, according to the Oxford English Dictionary, is “a labour market characterized by the prevalenceVorherrschenprevalence of short-term contracts or freelance work as opposed to permanent jobs”.

The elevator pitch survived those wild times, however, and the good thing about its survival is that it put selling back at the centre of business life. With more and more workers choosing to give up the nine-to-five job for life in the gig economy, people find themselves persuading, convincing and influencing others to give them something that they want — money, attention, products. They’re selling, in other words, and they’re not the only ones. Within companies, people constantly have to persuade colleagues and bosses to listen to their proposals, to watch those PowerPoint presentations, to read those reports.

We’re all selling now, and the better we are able to sell, the more we benefit.

Time for some ABC…

Sales hasn’t always had a good reputation, though. A key date in the negative view of selling is 1949, the year of the Broadway premiere of Death of a Salesman, by the American playwrightDramatiker(in)playwright Arthur Miller. Widely considered to be one of the greatest plays of the 20th century, it was remade for television in 1985 starring Dustin Hoffman, Kate Reid and John Malkovich, and directed by Volker Schlöndorff. Films about financial selling, such as The Wolf of Wall Street and boiler roomBoiler Room (wörtl.: Kesselraum; dt. Filmtitel: Risiko, der schnellste Weg zum ReichtumBoiler Room , didn’t improve the image of the salesperson either.

And then there’s Glengarry Glen Ross (see film still above). The 1992 film was adapted by David Mamet from his 1984 Pulitzer Prize-winning play of the same name. The castBesetzungcast was stellar (ifml.)grandiosstellar: Al Pacino, Jack Lemmon, Alec Baldwin, Ed Harris and Kevin Spacey.

They tell the story of two days in the lives of four property salesmanImmobilienverkäufer(in)property salesmen and what happens when head office sends Blake (Alec Baldwin) to “motivate” them by annoucing that only the top two will not be fired in a week’s time. In the film’s most famous scene, Blake to flip sth. overetw. wenden, umdrehenflips over a blackboardTafelblackboard that has two groups of letters on it. The first group is “ABC” and it means, as Blake famously says: “A-B-C. A, always; B, be; C, closing. Always be closing! Always be closing!” “Closing” is a classic sales term that refers to the process of making a sale.

…and for some AIDA, too

Marketing has had an easier time in Hollywood. The Social Network, about the founding of Facebook, and Up in the Air, about a consultant who helps companies fire people, treat the topics of building a tech company and the reality of work-life balance with more empathy and humour than cynicism.

“Sales” describes the different activities that help to sell goods or services. Salespeople are responsible for managing relationships with potential clients (“prospects”) and providing a solution for them that eventually ends in a sale.

“Marketing” covers all the activities that help create interest in a business. Marketers use market research to understand the interests of potential customers, and marketing departments are responsible for running campaigns to attract people to a brand, product or service.

The positive image of marketing has been helped by its willingness to change with the times. Here’s a recent headline from the news site TechCrunch: “Australian influencer marketing startup Tribe to raise (money)(Geld) aufbringen, beschaffenraises $7.5M as it to eye sth.etw. im Visier habeneyes US expansion”. Readers of Anthony Ha’s story learned that Tribe, which helps brands buy content from so-called micro-influencers, is working with Unilever, L’Oréal and Marvel to market their products.

Tribe claims to have 50,000 micro-influencers on the platform. These are people who have an audience of between 2,000 and 50,000 followers on a particular social media channel and usually focuses on a niche marketNischenmarktniche market — quite the opposite of “macro-influencers” such as Kylie Jenner and Kim Kardashian, and Chiara Ferragni (see Business Spotlight 4/19).

The challenge for marketing now is to keep up with new trends. What will brands do if more people begin to use voice-enabled devices such as Alexa? Can the marketing team produce high-quality audio content for these channels to reach old and new audiences, and to capture sth.etw. gewinnencapture their attention?

Back to Blake in Glengarry Glen Ross and that second group of letters. It’s AIDA, and as Blake puts it: “A-I-D-A. Attention, interest, decision, action. Attention. Do I have your attention?”
Do I have your attention? For sales and marketing, that’s the key question in a world where the elevator pitchKurzpräsentationelevator pitch might soon be reduced from one minute to one sentence. Or one word. 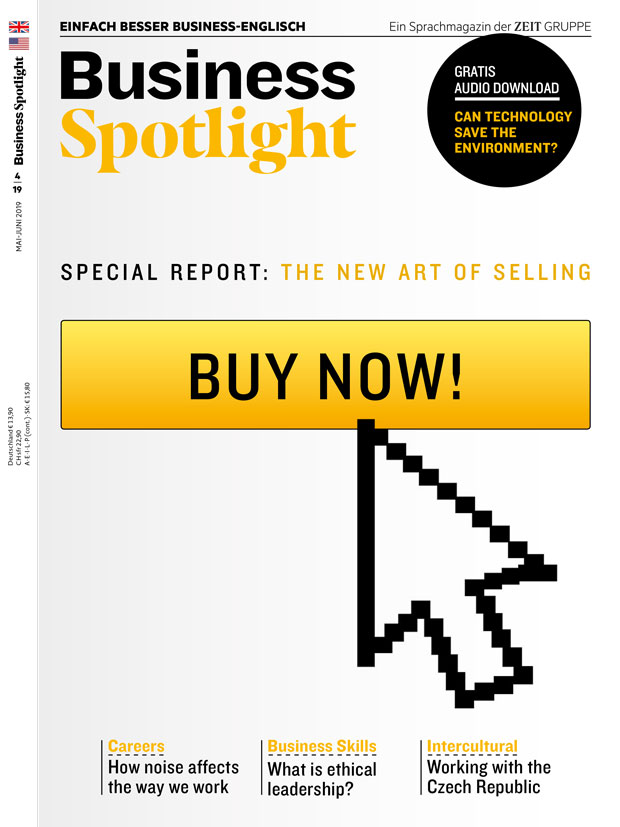 “People thought that EU membership would change everything”