How was your journey to work today? If you went by public transport, did your train or bus arrive on time and did you get a seat? If you went by car, did you have a smooth journey or did you get to get stuck in trafficim Verkehr steckenbleibenstuck in traffic? If you walked or went by bike, did you enjoy the good weather or did you get to get soakeddurchnässt werdensoaked or frozen before you arrived at work? Or did you jog to work, as part of your regular training scheduleSportprogrammtraining schedule?

Given the choice, I don’t think most people would choose to commute

to commutependelnCommuting — which the Oxford Dictionary of English defines as travelling “some distance between one’s home and place of work on a regular basis” — is an unavoidable part of working life for most people. And the experience is not always a pleasant one.

“Given the choice, I don’t think most people would choose to commute, but sometimes it’s unavoidable,” says Joan Day, an American secretary who commutes for more than an hour in each direction every day. “In my case, my husband and I work in two different towns, in opposite directions from each other. So we decided to live somewhere in between. I have a longer commute than he does, but he starts work earlier than I do, so it to even outsich ausgleichenevens out.”

The ups and downs of commuting

Commuting represents a separation between home and work and can play an important role in creating a space between these two worlds. The journey to work can help you to prepare yourself mentally for your working day, while the journey home can help you to to wind downsich entspannen (ifml.)wind down and leave the working world behind before returning to family life.

Indeed, one of the attractions of individual forms of commuting — going by car, on foot or by bike — is the opportunity to have some time alone to sort one’s thoughts, in contrast to the constant conversations and meetings at work. 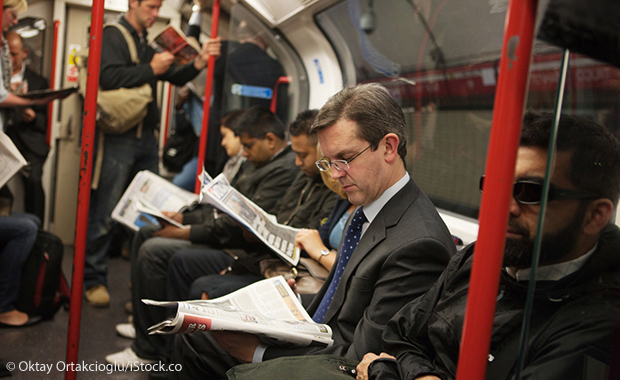 Time spent commuting by public transport can also be used positively, for example, for personal reading, learning a language, writing messages to friends, playing games or surfing the internet. But, it also often means being confronted by further noise and large numbers of people at close at close proximityin nächster Näheproximity.

A recent study in Britain — “Health in a Hurry: The impactAuswirkung(en)Impact of Rush Hour Commuting on Our Health and Wellbeing” — to commission sth.etw. in Auftrag gebencommissioned by the Royal Society for Public Health (RSPH) looked at some of the health effects of commuting.

More than 24 million people commute to and from work each day in England and Wales, for an average of 56 minutes. The RSPH discovered that the top three public transport problems that people felt were detrimentalschädlichdetrimental to their health were delays, overcrowding and antisocial behaviour. “The commute is hugely stressful,” said the report’s author, Emma Lloyd. “It’s natural that many people will reach for comfort foodEssen für die Seelecomfort food to relieve boredomLangeweileboredom or stress.”

Because commuting exists by definition in the space between home and work, it also epitomize sth.für etw. stehenepitomizes, for many people, a grey area between being “on duty” (at work) and being “off duty” (in one’s leisure timeFreizeitleisure time).

Should you work during your commute or just relax, maybe by reading a book, listening to an audio book or indulge in sth.sich etw. gönnenindulging in a hobby such as knittingStrickenknitting? This is very much an individual decision, but there are some clear taboos. These include checking your emails when you are driving or talking loudly about work on the phone on public transport, something that some organizations forbid for reasons of confidentiality.

On the other hand, some companies actually recognize commuting time as work time. If you do work regularly during your commute, discuss this with your manager or HR department. “Some people find it less stressful to get a bit of work done — or to at least have an idea what might be to face sb.jmdn. konfrontieren; hier auch: erwartenfacing them that day — than to wait till they get to the office and then be surprised,” says Business Spotlight’s Careers  editorRedakteur(in)editor Margaret Davis. “So if checking your emails before work makes you feel better, then by all means do it. If it stresses you out, read a book or listen to music.”

If you do work regularly during your commute, discuss this with your manager or HR  department. Some companies recognize commuting time as work time.

A mobile phone or book can also be a good way to avoid awkwardpeinlich, unangenehmawkward encounterBegegnungencounters while commuting — for example, if you see people who you don’t know very well, and aren’t sure whether or not you should talk to them. “Even if you’re not really checking your emails, you can pretend to be to be engrossed in sth.in etw. vertieft seinengrossed in them,” says Davis. 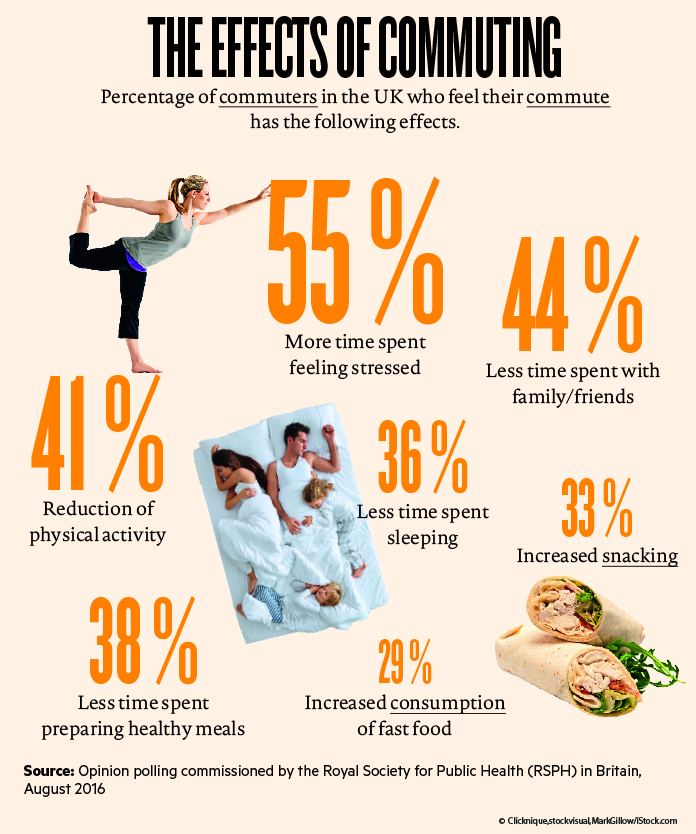