Robert Marchand cycled 22.5 kilometres around the Saint-Quentin-en-Yvelines velodrome near Paris on 4 January this year. It took him an hour. This would not be news, usually, but it was because Robert Marchand is not usual. He’s 105.

Born in 1911, Marchand says the secret of his fitness is dietErnährungdiet — lots of fruit and vegetables, a little meat, not too much coffee, an occasional glass of wine, sufficient sleep and an hour a day on his exercise bike.

In all, Qatar plans to spend $200 billion in preparation for the World Cup, but as Al Emadi said, “That doesn’t mean the stadiums only. We are talking about highways, rail, ports, airports. Those are to be underwayetwa: im Bau seinunderway, even hospitals and everything.”

Those hospitals will be needed. In 2013, the International Gewerkschaftsbundtrade union confederationTrade Union Confederation warned that up to 4,000 migrant workers could die in work-related accidents during the preparations for the 2022 World Cup. The resulting controversy forced Qatar to announce in December last year that it was ending its much-criticized kafala system, which prevented poorer workers from changing jobs or leaving the country without a permit.

A new game in town

when it comes to…was … betrifftWhen it comes to sport, the multinational financial services company is best known for its linkVerbindunglinks to FC Bayern Munich. Together with Adidas and Audi, it owns 25 per cent of the club, and Allianz owns the naming rightsNamensrechtenaming rights to the stadium — the Allianz Arena — for 30 years. But while football remains the the jewel in the crowndas Glanzstück;  hier: Aushängeschildjewel in the crown for nations, investors, sponsors and the television industry, there’s a a new game in towneine neue Optionnew game in town and Allianz is already part of its future. Welcome to the world of drone racing.

drone racingDrohnen-RennenDrone racing is a sport that has been compared to video gaming. Players, called “pilots”, fly custom-designedindividuell angefertigtcustom-designed drones through obstacle courseHindernisparcoursobstacle courses at speeds of up to 190 kilometres per hour. the biggest namehier: führendThe biggest name in professional drone racing is the Drone Racing leagueLigaLeague (DRL), a New York start-up, and this year’s Allianz World Championship will consist of six DRL races with 16 of the world’s top pilots competing against each other in Miami, New Orleans, Atlanta, Boston, London and Munich.

“Drones are already an important part of our business, so we’re to be excited to do sth.hier: sich darauf freuen, etw. zu tunexcited to to align with sb.sich mit jmdm.  zusammenschließenalign with DRL as they to harness sth.etw. (für sich) einspannen, nutzenharness the latest technological advancements and reimagine what racing in the 21st century looks like,” said Jean-Marc Pailhol, Allianz global head of market management and distributionVertriebdistribution.

There is a problem with sports such as drone racing, however: everyone involved remains seated all the time

Pilots have names like M0ke, Hazak and rekreK, and then there’s Little A, who’s actually Angela Jacques, a geographer and co-founder of MAPPA, a company in Mexico City that sells mappingKartografiemapping services and aerial photography using drones. “Always looking for solutions via geospatialraumbezogengeospatial thinking and new technologies” is how she describes her philosophy on her LinkedIn page.

There is a problem with sports such as drone racing, however. Everyone involved remains seated all the time and this to reveal sth.etw. zu erkennen gebenreveals an unhealthy truth about life today: we live in a sedentarysitzend; hier: mit überwiegend sitzenden Tätigkeitensedentary world. Yes, we buy more sports equipment, have record levels of gymTurnhalle; Fitnessstudiogym membership, watch more sport on more Gerätdevicedevices and, if what’s said in online chat rooms is to be believed, talk more about sport than ever. But we are increasingly experiencing our sport on sofas and developing bigger waistlineTaille; hier auch: Leibesfüllewaistlines as a result.

China’s Ministry of Health estimates that as many as 300 million Chinese people are obesefettleibig, adipösobese. This makes China the world’s second-most obese nation after the US. In Europe, a majority of European men and women will be either overweight or obese by 2030, according to the World Health Organization. By then, nearly all Irish adults are to be projected to be sth.etw. erwartungsgemäß sein werdenprojected to be overweight, and an estimated 77 per cent of Greek men and 67 per cent of Greek women are likely to be overweight .

So we need motivation to get off the couch, and the paradox is that the technology that is making us lazier is also being developed to make us more active. Players of Pokémon Go have walked nearly nine billion kilometres collectively since the smartphone game was to release sth.etw. herausbringenreleased last year, and the Apple Watch shows the total amount of time in a day in which you’ve remained standing or been moving for at least a minute.

Meanwhile, Garmin has designed a fitness trackerFitnessarmbandfitness tracker for children. The vívofit jr. encourages kids to move for 60 minutes a day and, in what some would see as a Big Brother tactic, Garmin says: “Parents, we didn’t forget about you. While the youngsters will love the app, … you can control the app and use it to monitor your kiddo (ifml.)Kleine(r)kiddos’ steps and active minutes, assign sth.etw. zuweisen,  übertragenassign choreAufgabe (im Haushalt)chores and even hand out virtual rewards. Control it all from your mobile device.”

One of these kiddos might grow up to be the next Roger Federer. He returned to tennis after a six-month injury break and won this year’s Australian Open in January in a magical manner. He’s also involved in the Nike+ Training app. “During my career, I did many practice sessionTrainingseinheitpractice sessions for my abdominalsBauchmuskelnabdominals, because everything starts here,” says Federer, introducing a fitness session called “Maestro”. For her fitness regimehier: Programmregime, Inbee Park, the South Korean professional golfer who became the first woman in 116 years to win an Olympic gold medal in the sport last year in Rio, prefers yoga. And, yes, there is an app for that, too. It’s called Golf Yoga.

“I could have done better”

Sport, with its stars, glamour, money, power, politics, fashion and technology, is a major playerwichtiger Akteur;  hier: bedeutender Wirtschaftszweigmajor player in the global economy and it creates jobs across a range of industries and services, from clothing design to Risikokapitalventure capitalventure capital.

For most of us, though, sport simply means jogging with friends, football with colleagues, Pilates classesPilates-Unterricht, -StundenPilates classes, hikingWandernhiking, biking, walking and all the other healthy activities that do not offer fameRuhm, Berühmtheitfame or fortune.

“J’aurais pu faire mieux” (“I could have done better”), said 105-year-old Robert Marchand at the end of his world-record cycle in January. We can all do better and sport is also an increasing part of corporate life. Below, you will find tips on making sport part of your work-life-balance(ausgewogenes) Verhältnis zwischen Berufs- und Privatlebenwork-life balance. 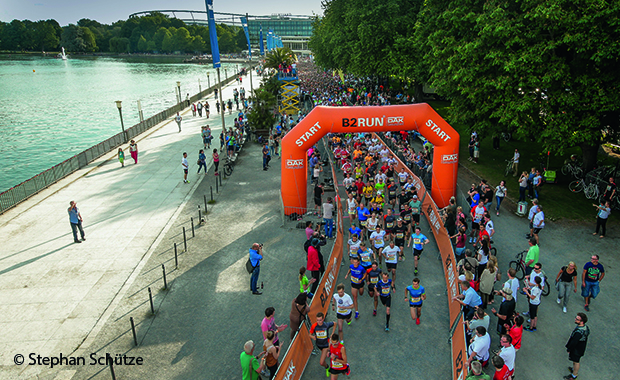 5 tips on making sport part of your work-life balance

Think you need a company car? Well, how about a company bike instead? Company Bike Solutions leases bikes to both firms and individual employees. Stay fit and do something for the environment, too.

3. Sport in the office

No time to do sport? That’s not really a good excusehier: Ausredeexcuse. The Washington Post has put together 12 exercises that you can build into your daily working life.

If you’re looking for a little help with your sporting routines, why not try a gadget or two. For example, a dumb-bell alarm clockHantel, die gleichzeitig als digitaler Wecker fungiertdumb-bell alarm clock that stops only when you do your exercises, or a walk stationKombination aus Computerarbeitsplatz und Laufbandwalk station that to allow sth.hier: etw. ermög lichenallows you to walk and work at the same time.

Does everyone need to do sport at work? No way! (ifml.)Nein!No way! “With the current obsession with sport, you get the feeling that if you are not super-active, you are a pariahAußenseiter(in)pariah,” said one employee who asked not to be named. Don’t want to do sport at work? That’s fine, too.