Do you see parallels between post-war Germany and post-war Japan?
I try to discourage my students from comparing Germany and Japan because today’s Germany wasn’t created until 1990. Until 1990, you had East Germany and West Germany, each with its own narrative. Each looked at who was responsible for the Second World War and who was the perpetrator(Übel-)Täter(in), Verursacher(in)perpetrator in very different ways. Initially, West Germany tried to say ordinary German citizens were not at fault. They were made to do horrible things and were to victimize sb.jmdn. schikanieren; hier auch: in die Opferrolle drängenvictimized [by the Nazis]. Which is very close to the Japanese narrative — that is, Japanese citizens had nothing to do with the war and they were victimized by the military and victimized by the Americans. But the West German narrative changed at some point in the 1960s, when the idea of collective responsibility became much more prevalentvorherrschend, verbreitetprevalent. Japan never had this 1968-style reckoningBerechnung; hier: Ansicht, Beurteilungreckoning. There was a little bit of trying to question what had happened, but it was never as widespread as in Germany.

Born in Germany in 1975, Dr Griseldis Kirsch is a senior lectureraußerordentliche(r) Professor(in)senior lecturer in contemporary Japanese culture at SOAS University of London. 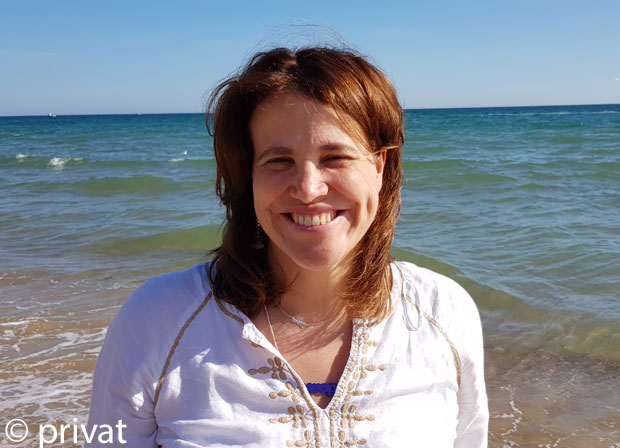 Why do you think Japan has never really to face up to sth.sich etw. stellenfaced up to its past in the way that Germany has?
I think we have to talk about the the elephant in the roomdas Offensichtlicheelephant in the room. The reason for the foundationGründungfoundation of the EU was to keep Germany to keep sb./sth. at bayetw./jmdn. in Schach haltenat bay. To establish checks and balancesSystem der gegenseitigen Kontrollechecks and balances to not let Germany be in a position to start a war with its neighbours ever again. So, in that respect, the EU has been a hugely successful project. There is no EU in East Asia. Japan was never forced to cooperate so early with its neighbours in the same way that Germany was. The EU was founded in the 1950s. My father was born in 1936, and in 1950, five years after the end of the war, he was already at a German–French youth camp. The aim was to get the generation that hadn’t fought talking to one another. That didn’t happen in Japan. There was never a multilateral organization that covered much of the Asian continent. Former enemies were never forced to sit down and work together.

How would you describe the current relationship between Japan and China?
When I started studying this in the 1990s, it wasn’t such a bad relationship. I did a research project about how Japan was really to engage with sb.hier: mit jmdm. in einen Dialog tretenengaging with its Asian neighbours during the Cold War. But as the project progressed, the relationship got progressively worse. Japan and China have never really to see eye to eyeeiner Meinung sein; hier auch: harmonierenseen eye to eye. This is where the conflict comes from: which country sees itself as superior? Currently, each country considers itself to be superior to its neighbour.

Former enemies were never forced to sit down and work together

How has this been reflected in Japanese popular culture?
With absolute silence. It was almost as if China and the rest of East Asia didn’t exist. Rarely did any kind of television drama or even manga or animeAnime, japanische Zeichentrickfilmfiguranime include characters from East Asian countries. This changed towards the end of the Cold War. In my research, I call it the “Asia boom”. Suddenly, you get Asian characters in lots of films, and in television dramas a bit later. But then it stops almost as suddenly as it started. At one time, you had the idea that Chinese people needed to come to Japan to learn, because Japan was the advanced country. They would study there and take knowledge back home. But then it progressed to: “Oh, all of these Chinese are here!” Then in films, you saw lots of the Chinese mafia in Tokyo. And Chinese people seemed so incrediblyunglaublichincredibly energetic, building their economy and doing well, while Japan seemed to be stagnating. This was around the time of the “Lost Decade” for the Japanese economy in the 1990s. At this point, China and Japan started to to fall out with sb.sich mit jmdm. zerstreitenfall out with one another. There were increasing Chinese protests after Japanese politicians visited the Yasukuni war shrineSchreinshrine in Tokyo and about how Japan dealt with memories of the war.

What about the Japanese relationship with South Korea?
It’s very similar and very different at the same time. China was never fully formally colonized by Japan, unlike Korea. China’s ManchuriaMandschureiManchuria was a puppet stateMarionettenstaatpuppet state from 1931 onwards, but the whole of the Korean Peninsula was a Japanese colony from 1910 to 1945. The relationship between Japan and South Korea is fraughtbelastetfraught because of this. Koreans were very much to drag sb. into sth.jmdn. in etw. hineinziehendragged into the Second Sino–Japanese War [against China from 1937 to 1945] and they fought as Japanese citizens, although they were second-class citizens. We need to keep in mind that the whole of the Korean Peninsula was a Japanese colony. China “only” fought a war against Japan from 1937 onwards and it was very brutal for the Chinese. They want recognition of the 1937 Nanjing massacreMassakerMassacre, which the Japanese are still not willing to give, particularly not the current government. They’ve really got rather revisionistrevisionistischrevisionist tendencies with regard to history. For South Korea, it’s all about how Japan apologizes and to atone for sth.etw. wiedergutmachen; hier auch: sich zu etw. bekennenatones for its actions during the Second World War. But very prominentführendprominent Japanese politicians feel Japan has nothing to apologize for.

How do you see Japan’s relationship with the US?
I think the US is partly to blame for where Japan is today. Because of the Cold War and because the US wanted to keep Japan securely in the capitalist campLagercamp, the US didn’t force Japan to face up to what they had done in the rest of East Asia. Most people know that Japan had fought the US and lost. But what they actually did in China is not widely known in Japan. If you watch films in Japan that deal with war memory, the vastgroß, überwältigendvast majority of them have the US as the enemy. There are very few examples that mention what happened on the Asian continent. It’s almost as if this war is out of the public memory — it just doesn’t exist in the same way.

You were an adviser to the Amazon series The Man in the High Castle. What exactly was your role?
I was involved in the first one and a half seasonStaffelseasons. I didn’t advise them on the final season. I read the scripts, then to give sb. inputjmdm. Anregungen gebengave them input, and answered questions on Japanese culture and war memory. I think the idea for a series about Germany and Japan winning the war is compellingzwingend; hier: fesselndcompelling. It’s the “What if…?” alternative history. During the 2010 World Cup, I was already in the UK and we were a bit worried about things when England played Germany. For the most part, it was absolutely OK. But there was one incidentZwischenfallincident. I was walking along a street with my family and we were speaking German to one another. Somebody walked up to us and said, “I just don’t to get sth.hier: etw. kapierenget it — how you guysUS ifml., ihryou guys lost the war.” We were completely shocked, and I just said, “I’m actually glad that we lost it.” This completely to throw sb.jmdn. aus der Fassung bringenthrew him, because it’s not a patriotic thing to say. He asked why, and I said, “Picture Europe if Germany had won the war. What would it be like?” He looked at me and you could almost see his brain working. And he said: “Yes, I think I know why you said it.” I thought of this guy when The Man in the High Castle ended up on my desk.