Fighting to save the rhino (ifml.)Nashornrhino: Jessica Babich is the director of Save the Waterberg Rhino. The organization aims to stop the slaughterGemetzelslaughter in the Waterberg Biosphere Reserve via fundraisingSpendenaktion(en)fundraising, increased security and greater awareness of the rhino Wildereipoachingpoaching crisis. With some 1,250 white and black rhinos, the Waterberg is home to the third-largest rhino population in South Africa outside of the Kruger National Park.

What is your personal motivation to save the rhino?
The ironic thing is that the rhinos are saving us. By working to save rhinos, we’re helping to increase security support within our greater area, encouraging collaboration and communication between public and private stakeholderInteressenvertreter(in)stakeholders, and bringing communities together. Everyone benefits.

What are the wider implications of rhino poaching?
Rhino poaching is linked to one of four black-market trades that affect our daily lives, namely weapons, drugs, human traffickingMenschenhandelhuman trafficking and wildlifeWildtierewildlife trafficking. Where one of these exists, so will the others. 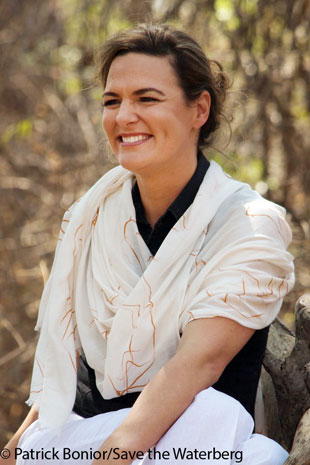 Poaching is obviously linked to weapons and this to translate into sth.hier: etw. bedeutentranslates into a broader crime issuehier: Problematikissue. Through our work to help protect the Waterberg rhinos, we have realized that everything links back to the issue of crime. By protecting rhinos, we protect everything else as well, from the land itself to the businesses and communities that rely on a safe, healthy, natural world here in the Waterberg.

How would you describe your aims to help protect the Waterberg rhino?
Our vision is to lock down the entire 1.7-million-hectare (4.2-million-acre) region of the Waterberg plateau. This is currently underway, thanks to the integrated use of various technologies, as well as manpower.

As long as you have corrupt people at all levels of the private, government and public sectors, poaching and lack of law enforcement will persist

Could drones or other new technology help?
There is no silver-bullet solutionPatentlösungsilver-bullet solution to solving the rhino poaching crisis, which is why integrated approaches to protecting rhinos are so important. As long as the demand is there, poaching will continue. Horns to fund sth.etw. finanzierenfund other black- market crimes. That is why STWR has to adopt sth.etw. einführenadopted a proactive as opposed to a reactive approach to rhino poaching — and, ultimately, to crime reduction. From foot patrolPatrouillepatrols to our aim of locking down the Waterberg, we’re working to keep criminals out as much as possible.

Why are rhino poachers so successful in South Africa?
Poachers usually act on inside information. As long as you have corrupt people at all levels of the private, government and public sectors, poaching and lack of law enforcementStrafverfolgunglaw enforcement will persistfortdauernpersist. This is a global problem and not just one that ­to affect sth.Auswirkungen auf etw. habenaffects South Africa. It is also a factor that South Africa’s socioeconomic and sociopolitical situation isn’t healthy. With high levels of poverty come higher levels of crime.

Why isn’t more being done by the police or the government to prevent rhino poaching?
Believe it or not, there is a huge amount of good work being done by good people at police, government and law enforcement levels. Corruption is a factor that is very difficult to fight, but we work with people, groups and organizations that continue to fight the good fight against some extremely difficult against difficult oddsunter erschwerten Bedingungenodds. The situation would be far worse if it were not for the collective that works for the greater good. 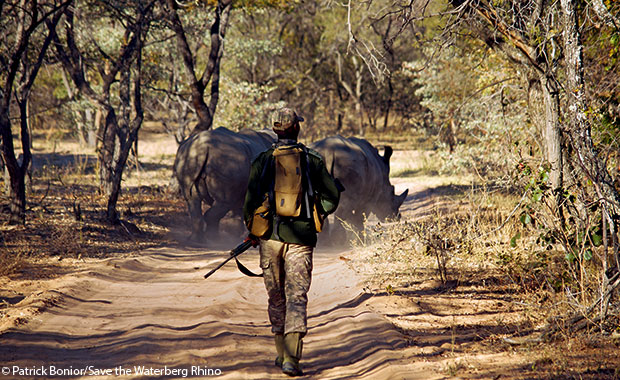 What would be the best way to stop rhino poaching?
There is no single solution. Demand is there and as long as there is demand for a product, trade will continue. Educating people about the crisis is key to success. People can’t contribute to a solution if they’re not aware that a problem exists. For example, there isn’t any point telling a child or an adult to protect a rhino when they don’t even have food on the table. But telling them how rhino poaching is to be linked to sth.mit etw. verknüpft sein, zusammenhängenlinked to crime and how we can work together to keep our communities safer can help.

Is there a danger that rhinos might to become extinctaussterbenbecome extinct unless we act?
Yes, without a doubt. The poachers want rhinos to become extinct, as it increases the value of their products, further to fuel sth.etw. anheizenfuelling black-market trade.