Permaculture is an umbrella termOber-, Sammelbegriffumbrella term. It’s a way of understanding the language of nature: what nature is doing and how it is doing it in order to create,” says permaculture educator and ecological designer Peppi Zen Gauci. “Nature is always creating. That’s what it does best.”

As a concept, permaculture finds itself at the crossroadsKreuzung; hier: Schnittpunktcrossroads between a number of different disciplines, ranging from agriculture to design. The word itself is a combination of “permanent” and “culture” and/or “agriculture”. The author of the Introduction to Permaculture, Bill Mollison, says that “the aim is to create systems that are ecologically soundsolide; hier: gesund, intaktsound and economically viablelebensfähig; hier auch: tragbar, rentabelviable, which provide for their own needs, do not to exploit (sth.)(etw.) ausbeutenexploit or to pollute (sth.)(etw.) verschmutzenpollute, and are therefore sustainablenachhaltig; zukunftsfähigsustainable in the long term”. It was Mollison and his colleague David Holmgren who invented the term “perma­culture” in Australia in the 1970s. The pair worked to prioritize age-old practices that are in symbiosis with nature over profit-driven agriculture.

Since then, the concept of permaculture has changed. When people hear the term, they often think of gardening, but it extends far beyond that.

In her book People & Permaculture: Caring and Designing for Ourselves, Each Other and the Planet, permaculture designer and author Looby Macnamara points out that the term now has a much more complex meaning. “Permaculture has to evolvesich entwickelnevolved from being purely land-based to involving people in land-based systems, to thinking about the invisibleunsichtbarinvisible structures within community groups,” she explains.

Many people see a connection between social work and perma­culture, as the focus of permaculture is the integration of people into their environment. Niki Taylor spent 12 years working as a social worker in the Manchester area of England before changing her career and setting up Talbérou, her own woodland events centre in Penne-d’Agenais, in the Lot-et-Garonne region of south-west France.

Taylor now runs on-site permaculture and nature connection courses, and also offers massage therapy and yoga classes. “When I was working as a social worker, I felt that I was constantly wrapping bandageVerbandbandages around wounds that were never going to heal. The system was all very top-downhier: hierarchischtop-down, and the legislation wasn’t centred around the community. There wasn’t really enough about how nature can heal.”

It was the ecological systems theory, developed by Russian-born American psychologist Urie Bronfenbrenner, that initially to spark sth.etw. auslösensparked Taylor’s interest in permaculture when she was studying politics back in 2000. “The theory looks at the individual, the nuclear familyKern-, Kleinfamilienuclear family and then progresses outwards towards the macrosystem, which is society as a whole,” Taylor comments. “When I studied permaculture, I was also interested in the idea of the system starting from yourself.”

Taylor’s permaculture design courses focus on the importance of not exploiting nature. The aim is to create cyclical systems that require minimum input. The water that falls off the roof is to harvest sth.etw. ernten; hier: auffangenharvested and used to water the garden. It is given to the chickens, too.

Taylor also collects the eggs from the chicken coopHühnerstallchicken coop and uses the nitrogenStickstoffnitrogen-rich chicken droppingsAusscheidungen, Kotdroppings as natural fertilizerDüngerfertilizer for her specially designed gardens, which include a mandala garden, a lasagne garden and a keyhole garden. “There’s a whole cycle in place. What I offer is educational permaculture. People can come and observe what I’ve put in place, but the land is the real teacher, not me.”

Reaching groups of people who might not initially have been interested in permaculture is also important to Taylor. She aims to use neutral, accessiblezugänglich; hier: (gut) verständlichaccessible language when doing social-media marketing. “I marketed my roundhouse building course to carpenterTischler(in), Zimmerer/Zimmerincarpenters, for instance,” Taylor explains. “I talk about things that appeal to a wide range of people like wildlifeTierweltwildlife and bird watching.” The real education happens on-sitevor Orton site, and Taylor doesn’t want to to scare sb. offjmdn. abschreckenscare people to scare sb. offjmdn. abschreckenoff with niche languageNischenspracheniche language, as community building is one of her to be key to sth.für etw. ein Schlüsselfaktor seinkey goals.

Regenerative design expert, permaculture gardener and teacher Zairah Khan also sees permaculture as a way of connecting people. “There are all these problems in society. Permaculture has a role in bringing people together and giving them something positive to work towards.”

Khan spends a lot of her time working with children from different backgrounds in her local area of The HagueDen HaagThe Hague, in the Netherlands. One of her recent projects is the Future Garden. The local municipalityKommunalverwaltunglocal municipality gave Khan permission to apply perma­culture principles to a plot of landGrundstückplot of land in The Hague. Khan uses the Future Garden project to educate children about edibleessbaredible plants and plant species that attract insects.

For Khan, observation is key to understanding permaculture. “I do workshops with children where I ask them to look at the garden from the perspective of a frog, a butterfly or a bee. Without even doing anything, their view of the garden changes. A garden that they initially thought was unattractive becomes a positive, insect-friendly place.” 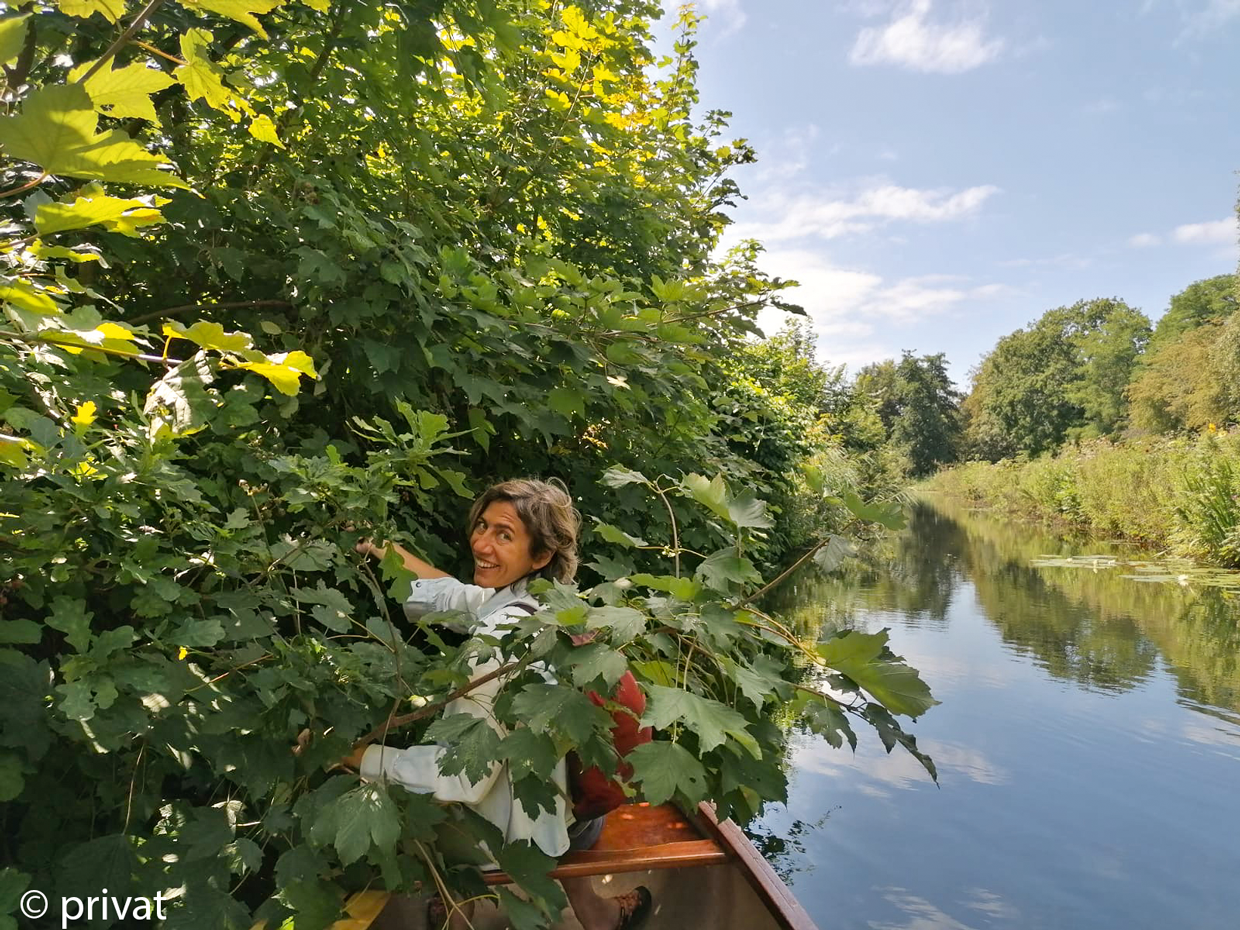 Living in a coastal area, Khan is also particularly interested in broadening people’s awareness of the coastline. In 2015, she founded the NGO BlueO2, which focuses on developing real-world solutions to environmental problems through the application of permaculture design principles. “I founded BlueO2 because I saw this gapLücke; hier: fehlendes Bindegliedgap,” she says. “There were the green people who wanted to protect the land and the blue people who wanted to protect the ocean, but nobody was really looking in the middle. You need this integral approachHerangehensweiseapproach, and that is very much permaculture — bringing things together rather than separating them. So, that’s why our focus is on coastal areas.”

For example, the duneDünedunes in the south of Holland are an important source of drinking water, but this groundwater is threatened. “The dunes are a really delicatefein; hier: empfindlichdelicate ecosystem, so when the pressure from the seawater becomes bigger than the pressure of the freshwater inside the dunes, the saltwater starts to to infiltrate  ,eindringen, einsickerninfiltrate and threatens our drinking water reserves,” Khan explains. “So we collect rainwater and to restore sth.etw. wiederherstellenrestore the hydrologyGewässerkunde; hier: Wasserhaushalthydrology of the soil(Erd-)Bodensoil rather than just building dykeDeichdykes. We’re increasingly realizing that it’s not just about fighting the water, it’s also about living with it.”

Another permaculture expert who has a close connection to the sea is Maltese ecological designer, permaculture educator and keen (UK)begierig; hier: leidenschaftlichkeen surfer Peppi Zen Gauci. Now located in Portugal, Gauci works at Zee Barn, a permaculture centre located in the muni­cipality of Encarnação, in the Lisbon region, just three kilometres from the sea. 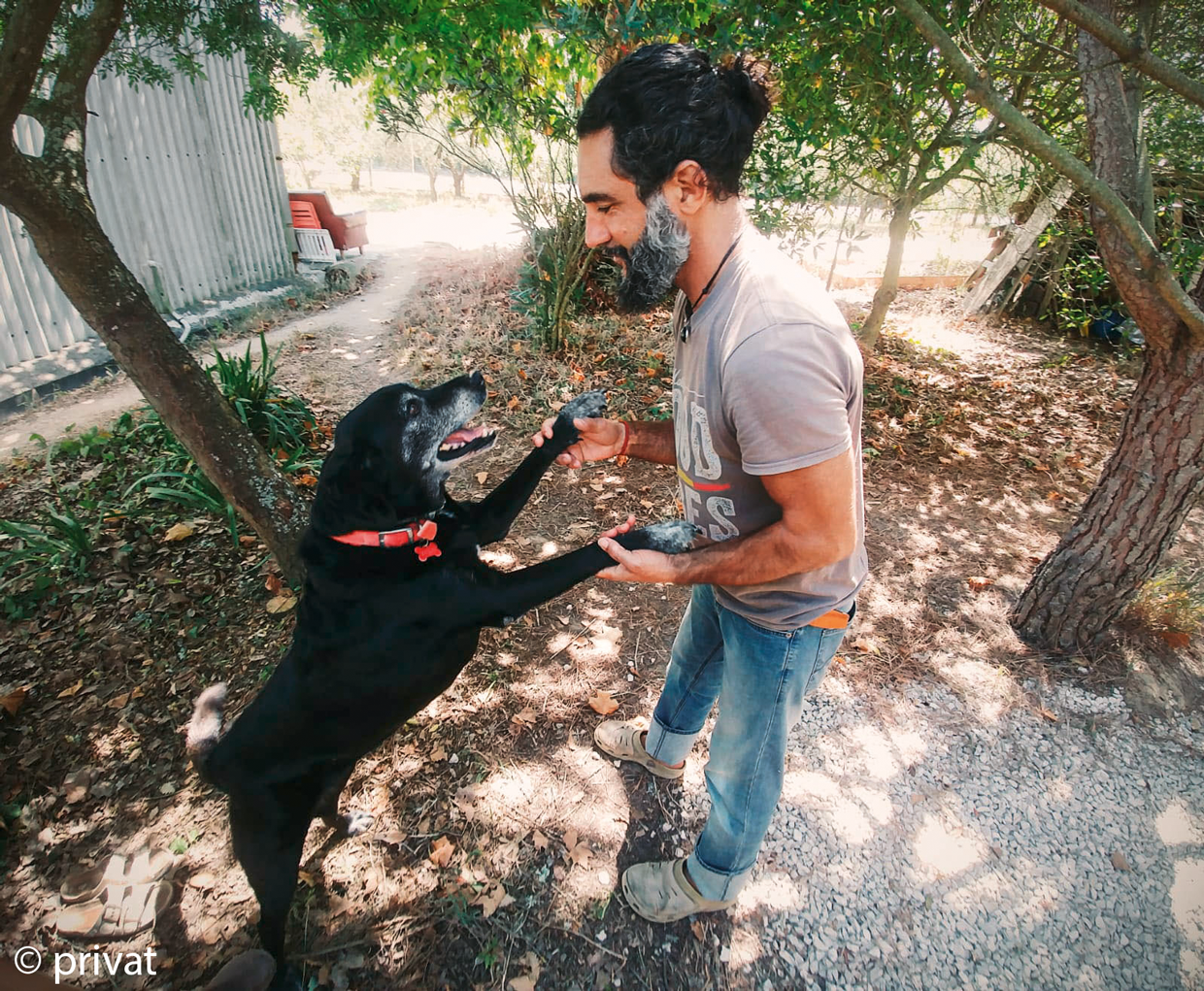 Gauci spent 18 years working on a permaculture project in Malta called Bahrija Oasis, which presented many challenges as a result of the island’s aridtrocken, arid; hier auch: ausgedörrtarid landscape. “I put all the permaculture lessons I had learned to put sth. to the testetw. auf den Prüfstand stellento the test. It took a lot more energy to implement them in a place that had all these counterflowGegenstrom, -strömungcounterflows, but it worked. I can say from my own experience, permaculture can work anywhere on this planet.”

Having moved to Portugal, Gauci now runs courses on permaculture and growing superfoods. Course participants are also offered the possibility to stay on for internshipPraktikuminternships to continue their training in permaculture. “When people stay here, they learn about permaculture, and they practise yoga, meditation and sound healing,” he says. “It’s all about a holisticganzheitlichholistic lifestyle, living in the consciousness of nature, to revive sth.etw. neu beleben; hier: etw. neue Impulse gebenreviving our psyche and regenerating ourselves.”

Wherever permaculture educators are based, and whatever the landscape is like that they are working with, the key principles remain the same. As Zairah Khan says: “It’s about people care, earth care and future care.” Permaculture focuses on building bridges between people and their surroundings, allowing natural symbiosis to to emergeentstehenemerge.

The ideas, the passion and, above all, the systems behind permaculture are to transmit sth.etw. übertragen; hier: weitergebentransmitted through education and, like a seedSamen(korn)seed on the breezeBrise, Windhauchbreeze, this knowledge eventually to take rootWurzeln schlagentakes root elsewhere — and so the cycle continues.